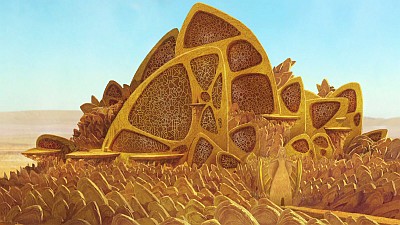 Aboard the ship, Gaspard wants to get rid of Mendoza, but Laguerra convinces him to keep him for blackmail. They head to the City of Gold where Esteban, Zia and Tao have entered, looking for the tomb of Rana'Ori. Tao discovers that the city of Kûmlar is built with moving orichalcum sand. The children start going up and come by the room of luminoprojections of the Sages of Mu and Atlantis with Rana'Ori. The princess wears a royal double medallion, that they have to find before Ambrosius.
Meanwhile, Ambrosius, Laguerra and Gaspard land at the top of the City, and come into the princess's tomb room. Ambrosius orders Gaspard to watch Mendoza in the ship, and Laguerra follows. He opens the tomb with the black suns and snatches the double medallion from the mummy's neck, but the City then starts to close down.
The children cross paths with Gaspard then Laguerra, and come into the tomb room which starts to fill with sand. Ambrosius, drunk with power, wants to get rid of the chosen ones now that he can open the Cities of Gold with the double medallion. Zia intervenes, and uses her gift to take off Ambrosius's crown, stopping him from controlling the black suns, and grabs the double medallion. Ambrosius tears it from her hands and pushes her away. Zia's about to fall in the sand pits, but Esteban and Tao catch her.
The children are in a bad place, when Mendoza rushes in, freed from the ship. As Ambrosius escapes, Mendoza saves the children, soon helped by Laguerra who confesses her love and kisses him. But Gaspard intervenes, abducts Laguerra and pushes Mendoza and the children into the pit. Luckily, they can escape with the floating pads and leave the City of Gold before it collapses. Zia fetches the medallion disks from the eyes of Rana'Ori, and all are met with Sancho, Pedro and the Chaldis.
They watch Ambrosius's ship fly westward and decide to follow it with the Golden Condor, towards the fifth City of Gold.

Documentary: oriental architecture with its moucharabiehs, air conditioning system with geometric shapes, and its mosaics of mirrors.
Kokapetl's Scoop: the mystery of the next cities of gold and recap of the protagonists met by our heroes.