Episode 22: The Lord of The Desert 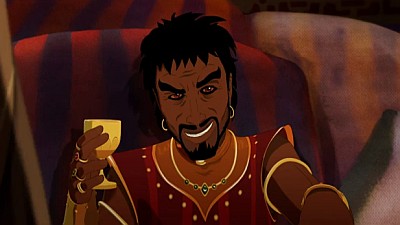 Threatened by Zares and Laguerra, the three children must follow them and get back to the surface. Zares tells them Mendoza is going back to Spain and can't help them now. Once atop the stairs, Tao and Esteban have an idea: they trigger the moon symbol mechanism, and the stairs fall under Zares and Laguerra, who fall to the bottom of the pyramid. The children run away and escape the pyramid, closing the hidden door. Before heading to the Golden Condor, Zia wants to fetch Ambrosius's compass in his ship, so he can't follow them. The children get rid of Gaspard, who now works for Ambrosius, and grab the compass, maps and strange orichalcum coins minted with the emblem of the Order of the Hourglass..
Meanwhile, Zares breaks out of the pyramid with his armor and leaps out, just as the children fly away aboard the Golden Condor..
At the same time, in the desert, Mendoza heads to Akkad with Malik. Sancho and Pedro, back on land, search for Mendoza on camelback..
Aboard the Golden Condor, Tao finds a clue on Ambrosius's maps and they head to the Manfurah oasis. Once there, they find that no one's ever heard of Rana'Ori. They're suddenly arrested by guards who lead them to Jabbar, lord of the desert and owner of the place. They're accused with having eaten and drunk from the oasis without paying the fee. The children pay with Ambrosius's golden coins, that Jabbar seems to recognize. Fearing that Zares finds them, the children want to leave, but they'll have to spend the night at the now-closed caravanserai.
Meanwhile, Malik and Mendoza have set camp for the night, when a mysterious noise sounds out in the desert.

Documentary: the ancient city of Persepolis, south-west of Iran, founded by the Persian king Darius I.
Kokapetl's Scoop: the making of pendants adorned with cuneiform symbols, one of the oldest writings in the world.