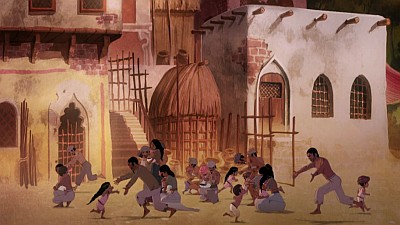 Ambrosius shows Esteban the power of the black suns to intimidate him and tells him he's guessed the children's plans to save the Rajah. Meanwhile, Zia keeps distracting the guards with the Condor while Sancho and Pedro free the villagers. That's when Gunjan and Indali come in and break the palace doors on their elephant's back; the prisoners can escape, helped by the guards that don't want to harm them.
Ambrosius, distracted by the ruckus, doesn't see that Esteban has readied a small blowgun with Zia's antidote and shoots a dart into the Rajah's neck. The latter realizes he's been drugged and orders the alchemists to be stopped. Ambrosius is in a rage: with the black suns, he threatens the Rajah with flames and sets the palace ablaze.
Mendoza stops his swordfight with Laguerra because of the fire and lets her go, for she didn't tell on him back in the forest. Tao frees Athanaos who gets on the roof, where Zia picks him up, and then goes looking for Esteban. The latter uses the fire to evade Ambrosius, who hides in his lab. As he gathers his stuff into the ship, he tells Laguerra to fetch the orichalcum matrix in the factory, but they can't get to it and have to flee.
Everyone is safe outside, except Esteban and Tao stuck in the flaming palace. They all worry when the fort starts to collapse, but Tao and Esteban find the Olmec machine, that Tao haphazardly flies and lands out of the palace, to everyone's relief. Esteban meets with his father and the villagers with their Rajah.
That night at the village, everyone's gathered around a fire; the Indian children offer Sancho and Pedro emeralds to thank them for saving their parents. As for Mendoza, now that he's brought Esteban back to his father, he's thinking of going back to adventure.

Documentary: elephant rides and the Amber Fort in Jaipur, residence of the Maharaja with countless rooms.
Kokapetl's Scoop: the huge pots to feed the thousands of servants of the palace of Raja.