Episode 25: The Serpent and The Lion 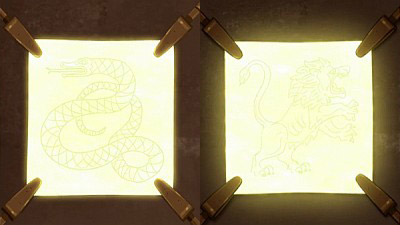 Esteban, Tao and Zia keep asking sheik Hakim and Malik about the second veil that will lead them to the city of Kûmlar. When Esteban shows him the first veil, the sheik reveals a chest holding the second one, bearing a lion.
Meanwhile, outside, Mendoza worries about Laguerra's injury and offers her to come with them aboard the Golden Condor, since she seemingly changed camps because of Ambrosius's acts. That's when scouts warn them that Ambrosius's ship is coming. They make a plan: while sheik Hakim leads the children to the City of Gold, the three sailors will help the Chaldis slow down Ambrosius.
The sheik leads the children to a temple hidden away in the mountain, then goes back to help his men. Laguerra's secretly followed them. Inside are two devices where the children hook the veils. Then Tao lights up the room using an array of mirrors. Shining through the veils, the light shows a map of the desert, revealing the location of the City of Gold. They follow a path in the mountain but come to a dead end. Esteban calls the sun forth, which reveals two slots in the cliff. Esteban and Zia put their medallions in, revealing a passageway to a giant woman statue, whose head alone peeks out of the sand.
Not far from here, the Chaldis' zeftis fight Ambrosius's ship but can't stop it. Only Mendoza and Malik manage to come aboard to fight Ambrosius and Gaspard. Laguerra warns Ambrosius with the pyramid top and joins him. While Malik is thrown out by Zares, Mendoza is made prisoner by Laguerra, to his great surprise.
In the desert, the children's medallions wake up the statue, and the splendid and mysterious city of Kûmlar rises from the sand.

Documentary: the archeological site of Naqsh-e Rostam in Iran, tomb of the first kings of the Persian empire, covered with bas-reliefs in honor of the sovereigns.
Kokapetl's Scoop: the dromedary, able to carry heavy loads through the desert without drinking.