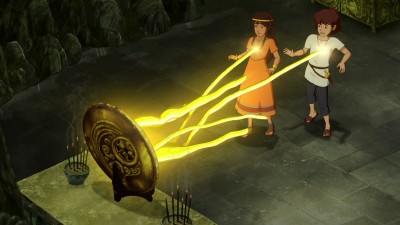 Alone with the mirror-shield, the children remember the utsuro-bune's words: flipping it over, it activates and recognizes their medallions. A Muan message appears: “the key is under the hill which is under the fire which is under the door”. They get from it that the City of Gold has to be in the Sakurajima volcano and that the key's in the shield, but it's gone; they want to go ask Yoshi for help, but are trapped in the temple. Pichu then flies in and shows them a way out behind fallen rocks. They'll get to head to the Golden Condor.
At the castle, Ambrosius is fixing his ship, watched from a distance by Mendoza who's still held prisoner with Sancho and Pedro. As Mendoza wants to get revenge for Ambrosius's betrayal and steal his ship, Gaspard takes him to Shimazu. The Daimyo knows about the Cities and the children. To defeat the enemy clans and rule over Japan, he needs the Golden Condor and the secrets of the Cities. In return, he'll make Mendoza rich and powerful.
Night falls and the children come back to Yoshi's. The latter knows nothing of the shield key; Ichiro and Mariko warn them that Mendoza, Sancho and Pedro are still Shimazu's prisoners, but they can't do anything tonight.
Meanwhile, Gaspard brings Ambrosius's satchel to his new ally. They see that the compass is gone, stolen by Mendoza who wants to stop Ambrosius from following the children. Enraged, Ambrosius gives Gaspard a weapon to get rid of Mendoza once and for all.

Documentary: the tea tradition in Japan and its ritual preparation: kimono, chasen, chawan and matcha.
Kokapetl's Scoop: the temple of Gakuen-ji and the kappa, spirits of the water.