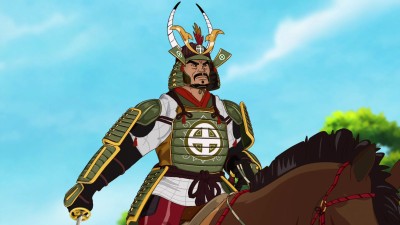 The three children meet Yoshi, who protects the utsuro-bune, the sacred relic on which are engraved the patterns of Esteban's and Zia's medallions. With them, they awaken the artifact which tells them that it contains a mirror-shield, the key to the next City of Gold. Yoshi invites them to his place and tells them that the shield's long since been moved to the Izumo sanctuary. The children will need Ambrosius's help to fetch the Golden Condor and leave for their next destination.
At the Daimyo Shimazu's castle, as Gaspard is teaching soldiers to wield arquebuses, Shimazu learns that Ambrosius's ship crashed nearby. He heads there and soon, Ambrosius is made prisoner alongside Mendoza, Sancho and Pedro.
When night falls, Mariko tells the news to her grandfather Yoshi and the children, who'll need to fish out the Condor without Ambrosius. Heading to the coast, they cross paths with Gaspard but manage to escape. Gaspard understands Mendoza has lied and that they're still searching for the Cities of Gold.
When morning comes, Ambrosius is summoned by lord Shimazu and pretends he'll help him fight off enemy clans, but that he needs to fix his ship first. Yet he betrays Mendoza by passing him off as a spy.
On the coast, Esteban tries to swim to the Condor, but gets tangled up in seaweed and almost drowns. Zia and Mariko, who's used to diving, go down in turn and manage to enter the Condor thanks to the sun and Zia's medallion. But the sun soon gets covered and sharks swim by the Condor. Zia and Mariko are trapped, on the brink of suffocation.

Documentary: Himeji Castle, similar to the home of Daimyo Shimazu.
Kokapetl's Scoop: the Japanese tradition of taking off your shoes before going home.