Episode 11: The Shadows of The Jungle 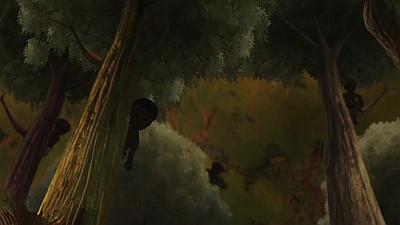 As Ambrosius threatens Mendoza, the latter is saved by the volcano; they all have to flee the flowing lava.
As Ambrosius escapes in his ship, Esteban reveals his plan aboard the Golden Condor. Thanks to the Thallios key, attracted to the crystal Esteban willingly gave the alchemist, they'll get to follow him. But they decide to give him a headstart and make a last visit to Yoshi and Mariko's place to tell their adventures.
Then comes departure; Esteban puts the key in the Golden Condor's medallion slot, and the bird flies on its own, guided towards the crystal on the ship. Days and nights pass, westwards above China, Thailand, then India.
Ambrosius finally lands at the Patiala fort in India, where members of his order await him. When they lock the crystal in a vault, our heroes lose track of him and have to land in the jungle before nightfall.
In Patiala, Ambrosius visits the Rajah, whom he heals in exchange for hospitality. We learn that he and his order are using peasants to work a mysterious factory. The alchemist then visits Athanaos, held prisoner, to tell him about the discovery of the third City of Gold.
In the jungle, as Sancho and Pedro try to fish, Mendoza gets firewood. The three children look for food in the jungle, when they get scared by frightening cries and menacing shadows. They run away and end up in a seemingly desert village, but the shadows have followed and surrounded them.
Mendoza, worried about their disappearance, runs after them with the sailors, and ends up catching up one of the pursuers.

Documentary: hanami, Japanese tradition to celebrate the arrival of spring and cherry blossoms, called sakura.
Kokapetl's Scoop: the art of gardening in Japan.