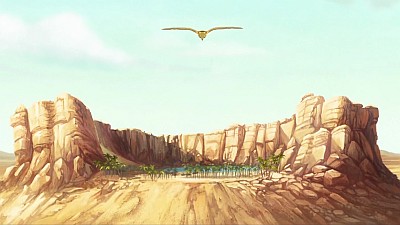 With his armor and Gaspard's help, Zares easily gets rid of Jabbar's guards. Outside, Esteban, Tao and Zia manage to get to the Golden Condor thanks to Laguerra, who fights away the guards chasing them. In return, the children let her come aboard. They head back to the caravanserai to fetch Rana'Ori's veils, but the place is dangerous. Esteban flies the Condor still next to Jabbar's treasure room, and Zia eventually manages to get the veils with her gift for moving objects. She makes the chest fly to the Golden Condor and they fly away. Meanwhile, Zares and Gaspard fly aboard their ship, under Jabbar's powerless glares.
In the Chaldis' camp, Mendoza and his companions are tried for camel theft. Sheik Hakim commands them to fight to set their fate: death or freedom. Mendoza must fight the bulky nomad champion; the fight's long and hard, but the clever Mendoza manages to triumph without killing his opponent. As promised, the Chaldis will help them find the children.
The latter have landed with Laguerra in the desert at nightfall. They find out that the chest only contains one veil, the one with the snake, and fall asleep without any clue as to where to find the second one. In the morning, they're woken up by the Chaldis, and the children meet again with the sailors that they thought gone to Spain. They all head to rest at the Chaldis' camp. The children meet the sheik Hakim and tell him about their medallions. Sadly, he knows nothing of the city of Kûmlar.
Not far from here, on the ship, Ambrosius's pyramid starts to glow.

Documentary: Pahlevans, Iranian athletes training in traditional gymnasiums called zurkhaneh, accompanied by the rhythm of the drums.
Kokapetl's Scoop: in Iran, icehouses built with thick walls to preserve the ice of mountains, in the middle of the desert.