Episode 20: The Mountain of The Moon 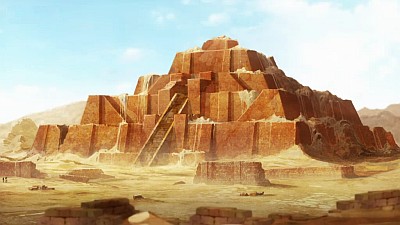 The three children fly towards Akkad on the Golden Condor, regretting Mendoza, Sancho and Pedro's absence. At nightfall, the Condor must land and they get some food. During the night, Esteban and Tao see Zia making pebbles levitate; she tells them that she's had this power since she's put on the crown in the underwater city.
Meanwhile, hidden in the Esperanza, the three sailors await the ship's departure and fall asleep. Come morning, as Sancho and Pedro still sleep, Mendoza offers his help to the captain. That's when he sees Malik, made prisoner by guards. The sailor leaps to his help and frees his injured friend, who tells him Ambrosius escaped. Mendoza and Malik come back to Hormuz with Nadim, as the Esperanza sails away with Pedro and Sancho aboard. Mendoza then sees that Malik has got a tatto of the emblem of his tribe, that looks like the children's medallion. That's why Nadim's followed them. The Bedouins, who have to leave town, offer Mendoza to follow them to Oman so he can find the children.
Meanwhile, Sancho and Pedro find out Mendoza's gone, but keep heading to Barcelona to open their tavern.
As for the children, they've continued on and finally arrive to the Mountain of the Moon. They enter a room where Tao reads an inscription: “The Mountain of the Moon will open when the lion meets the serpent”. There happens to be tiles on the ground, two of which figure a lion and a snake. The children manage to move them, and when the two touch, a mechanism opens a secret door.

Documentary: goats in the Zagros Mountains in Iran and nomads of the Bakhtiari tribe.
Kokapetl's Scoop: tents of nomads, living in harmony with nature.