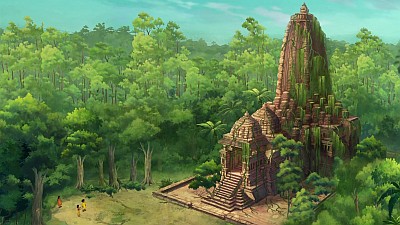 Our three heroes are actually chased by young Indian children, who think that Esteban, Tao and Zia are friends of “Redbeard the magician”. Mendoza joins them in the village with Indali, that he met in the jungle; she tends to the kids with Gunjan while waiting for adults to return, as they've been kidnapped by the Order of the Hourglass to work at the Rajah's fort. Esteban thinks his father is also held there. Indali tells them this region and the Rajah's fort are called Patiala, which means “land of the sun” according to Tao, like the capital of the Empire of Mu.
In his laboratory at the Patiala fort, Ambrosius examines the crown Sancho brought back from the City of Gold; he quickly understands that it can control orichalcum through thought. With the help of his order, especially Helvetius and Laguerra, he'll get to craft mysterious black suns, whose plans are kept in his pyramid of Mu.
At daybreak, Gunjan leads Esteban and Mendoza to the fort to find Athanaos, while Indali leads Zia and Tao to a lost temple in the jungle where the “magicians” often go; Sancho and Pedro stay in the village with the children.
Once in sight of the fort, Esteban sees Ambrosius's ship, but the palace is well-guarded. He sneaks in a hay cart to enter alone and looks for his father; he catches sight of Ambrosius and follows him.
Meanwhile, Sancho and Pedro are led by children to the “monkey cave” where they can find gemstones. Scared by the monkeys, they fall in a growling hole; frightened, they run away.
In the jungle, Indali, Zia and Tao find the Memorial Temple; inside are two members of the Order of the Hourglass, busy taking out a piece of the engraved wall. The children get discovered and hide while the “magicians” leave with their loot.
At the fort, as Ambrosius comes into his underground lab, he sees Esteban.

Documentary: Mehrangar Fort, in the city of Jodhpur in northwestern India, symbol of the past power of the Maharajas of Rajasthan.
Kokapetl's Scoop: Hanuman, the monkey god, sacred animal symbol of strength and wisdom.