Episode 23: The Veils of Rana'Ori 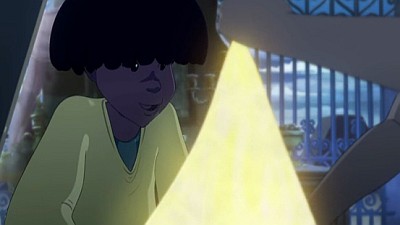 The mysterious noise turns out to be Sancho and Pedro, chased by their camel; by chance, the three sailors are finally reunited and happy!
At the Manfurah caravanserai, the children try to leave during the night, when suddenly Ambrosius's compass starts to glow: there's orichalcum behind a door guarded by a panther. Luckily, Zia calms the animal with her gift and they come into a treasure room. In the middle they find a strange chest that holds Rana'Ori's orichalcum veils. But that's when Jabbar comes.
In the morning, Mendoza, Sancho and Pedro arrive to the Chaldis' camp and Malik introduces them to sheik Hakim, their leader. The latter is furious to see strangers, bringers of trouble, but lets them stay until they find a caravan to Akkad. Soon after, scouts that fly on zeftis, strange wooden flying machines, tell they've seen a golden bird near the Manfurah oasis. Mendoza asks Malik for two camels to find the children, but he refuses, as their beasts are necessary to survive in the desert. Mendoza still decides to borrow two camels without they know it.
Meanwhile, Esteban, Tao and Zia are still Jabbar's prisoners when comes Zares's ship, who came to see Jabbar whom he's tasked with finding the veils of Rana'Ori. Jabbar sells out the children to Zares for more orichalcum coins. But Esteban intervenes, claiming the coins are not made of gold, as they cannot be melted. After checking it, Jabbar gets furious and a swordfight breaks between his guards and Zares, Laguerra and Gaspard. The children make use of the chaos to leave Manfurah, secretly helped by Laguerra.
In the desert, the three sailors are chased and caught by the Chaldis, and accused of stealing camels.