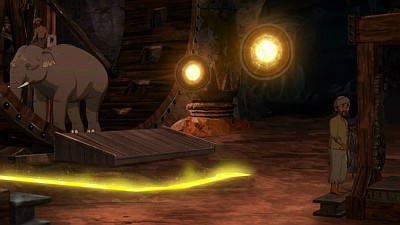 As Pichu evades the snake, Esteban lands the Golden Condor in emergency by the village, because of its stuck wing. Pichu ends up meeting them with Athanaos's message: the Rajah has been drugged by Ambrosius to control him and force the villagers to work. Night falls and Esteban needs to take out the sword stuck in the Condor's wing before dawn, so he can create a distraction as Mendoza, Sancho and Pedro enter the fort. Zia takes care of brewing an antidote to free the Rajah from the alchemist's control.
Meanwhile, the three sailors keep going down the underground river towards the fort, where Ambrosius is still trying to coax Tao into joining them. Tao pretends to hesitate, yet once in his room, he goes to see Athanaos. Sadly, Ambrosius and Laguerra are waiting for him. Angered, the alchemist leads Tao to the orichalcum factory. To intimidate him, he shows him the black suns, destructive weapons crafted from plans of the pyramid of Mu, and that he mentally controls with the crown from the third City of Gold.
In the morning, as Tao is brought back to his room, Mendoza, Sancho and Pedro finally arrive under the fort, where the villagers are forced to work. Esteban, helped with Gunjan's elephant, manages to take the sword off the Condor and Zia got to make the antidote. They immediately take off towards the fort.
Once at the palace, Zia distracts guards with the Golden Condor while Esteban sneaks in to look for the Rajah. Meanwhile, Mendoza and his companions knock out the guards and free the villagers. They go up and free Tao from his room before heading to Athanaos's. But they cross paths with Laguerra, and a swordfight breaks between the sailor and the swashbuckler.
Esteban ends up finding the Rajah's quarters, but Ambrosius is awaiting him and threatens him with the black suns.