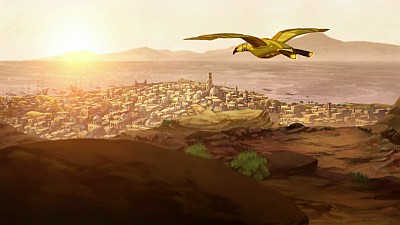 At the souk, Esteban Tao and Zia meet Nadim, the boy who stole the medallion, and his father Malik, who apologizes on his behalf and gives back the pendant to Zia. They go away but Nadim is tasked with watching them. The three kids find Mendoza and his sailors, who tell them about Ambrosius's plans. Pedro finds Nadim, who admits he knows where is Waga Fayat's shop. Coming to it, our heroes see the governor's guards but manage to get rid of them one by one.
Ambrosius and Laguerra are with the antiquary, who finds a map showing Akkad. He asks about Doctor Laguerra and Athanaos, whom he's helped in the past, but Ambrosius lies by saying they're both dead. Then, once he's got the map, Ambrosius tells Laguerra to get rid of Waga Fayat.
Luckily, our heroes arrive just in time. Mendoza threatens Ambrosius with his weapon and ties him up as well as Laguerra, who's relieved she doesn't have to obey. Thanks to the map they took from Ambrosius, the antiquary shows them the road to Akkad, northward to Mesopotamia, and tells them that the Mountain of the Moon is actually a ziggurat, a kind of pyramid.
That's when Gaspard comes by chance by the shop, but is bound in turn. Outside, guards are many; Waga Fayat leads the group out through the back, but they need to part ways. The sailors will distract the guards to let the children get to the Golden Condor and continue their quest. They'll meet again in Barcelone.
As Waga Fayat leads the children out of town, the three sailors lead the guards to chase them, but are stuck in a dead end. Suddenly, strange flying machines allow them to escape and they find Nadim on the rooftops. He leads them to Malik, a friend of Waga Fayat who gets them aboard the Esperanza, a Spanish ship on its way to Europe.
Meanwhile, Ambrosius and Laguerra manage to break free thanks to Gaspard, who gets hired by the alchemist as Mendoza is their common enemy. Going back to the shop, the antiquary notices their disappearance.
Outside of town, the three children fly towards Akkad with Waga Fayat's map, saddened to have been separated from the sailors, without knowing that Ambrosius, Laguerra and Gaspard are free and will follow them.