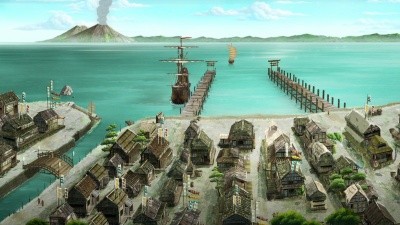 Our heroes are now in Japan, after Zares had abducted Esteban's father Athanaos, back at the end of season 2.
On the ship, Ambrosius hands over Athanaos and the orichalcum matrix to the people of his order, who take them onto the Olmec machine.
Esteban, Tao and Zia, with Mendoza, Sancho and Pedro, fly towards the coast of Japan with the Golden Condor. The latter suddenly shifts to auto-pilot, showing they're on their way to a third City of Gold. Soon after they land on a nearby bluff, the Sakurajima volcano erupts, shattering the bluff and sending the Condor down into the sea. Our flabbergasted friends don't know what to do and are led to the Kagoshima port by two young fisherpeople, Mariko and her brother Ichiro.
As they come ashore, the three kids get wary and decide to hide at Mariko and Ichiro's, while the three soldiers come across soldiers and seek shelter on a Portuguese ship; there, to their great surprise, they meet with Gaspard, who's taken to dealing weapons between Portugal and Japan and teaching how to wield them. He decides to sell out his old foe Mendoza and his croonies to lord Shimazu's soldiers.
Meanwhile, Ambrosius's ship gets close to Kagoshima, but he has to make an emergency landing as the volcano ashes gravely wear down the nave.
Not far from here, Esteban, Tao and Zia decide to look for the artifact that pulled the Golden Condor to it, somewhere in the forest. On their way, Zia finally tells Tao the secret of the lumino-projections: he's not alone anymore, for she too is a descendant of the Empire of Mu!
They end up finding a mysterious engraved golden sphere in the forest, where a strange silhouette comes in.

Documentary: Japan, between modernity and tradition, and the Sakurajima volcano.
Kokapetl's Scoop: the torii, portal between the real world and the spiritual world.