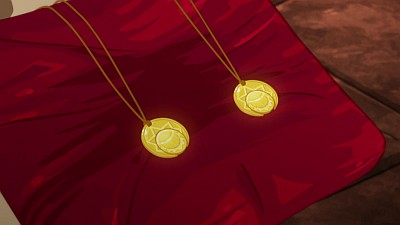 That night, Laguerra enters the village with the Rajah's men and members of the Order, but it's empty; thanks to Mendoza's trick, the children got to hide up in the trees. But as they're about to leave, Laguerra spots Mendoza protecting a child, yet says nothing and the group heads back to the palace.
Comes morning, the three sailors and Indali come meet Esteban, Zia and Gunjan in the monkey cave, where they've discovered the underground river that leads to the Rajah's palace. They make a plan to free Tao, Athanaos and the villagers; while Mendoza, Sancho and Pedro paddle to the fort, Esteban and Zia will cause a distraction with the Golden Condor.
Meanwhile, at the fort, Ambrosius tries to convince Tao to join them. He leads him to the orichalcum factory hidden beneath the palace, where the village children's parents are forced to work. To gain his trust, the alchemist agrees to free Pichu. Tao's amazed, especially when Ambrosius gives him one of the two medallions built with the orichalcum matrix. But the medallions quickly disintegrate, which saddens and enrages Ambrosius. Tao goes up with Pichu to Athanaos's cell, who writes a message that Pichu must bring to Mendoza.
As Pichu flies out into the jungle, Mendoza, Sancho and Pedro begin their boat ride on the underground river. As Esteban and Zia come to the Condor, they see two members of the Order of the Hourglass watching over it. Zia uses her gift to ask a bunch of monkeys to get rid of them. But as they take off, a guard's sword gets stuck in the Condor's wing, which makes it hard to pilot.
In the jungle, as Pichu rests on a branch, a snake slithers close.

Documentary: the Ajanta Caves, a 2000 years old monastery dedicated to Buddha.
Kokapetl's Scoop: the monkeys, sacred animals and the festival dedicated to Hanuman, the monkey-headed god.