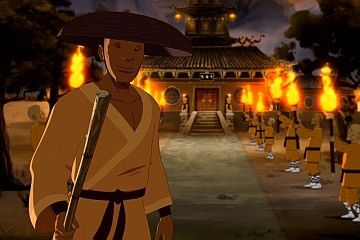 Heading for Beijing, the Condor has to land before the sunset. Our friends land near a temple. Tao is absorbed by the deciphering of Ambrosius' Book of the 7 languages, yet he ends up following Esteban and Zia. In the forest, they come across strange people armed with swords. They run away to a tavern, which is in fact the thieves' lair. Kokapetl leaves to alert when a monk intervenes to defend the children. Thanks to his kung-fu skills, he easily gets rid of the thieves. Sancho, Pedro and Mendoza arrive but the latter is hurt by the chief, who flees. The monk introduces himself: his name is Tian Li and he offers to bring them to the monastery of Shaolin where Mendoza will be healed.
There, the Shaolin Grandmaster begins to heal Mendoza's cracked ribs. They are invited to eat and to get a well-deserved rest, after purifying themselves with a bath. On their way, Tian Li introduces them to the art of Kung Fu and Esteban recognizes one of the thieves among the monks. Sancho and Pedro try to escape the bath but they are finally caught up by Mu-Chun, a massive yet very caring monk.
At the same time, Zares comes into the tavern and asks where did the foreigners go.
During the night, a stranger puts a snake in Tao and Esteban's bedroom, but they are fortunately alerted by Kokapetl. They try to pursue their aggressor...

Documentary: the Shaolin Temple in Hanan Province, where monks teach Kung Fu and tourists come to meditate and pray.
Kokapetl's Scoop: out of respect for the monks, we must not set foot on the march at the entrance of the temples.