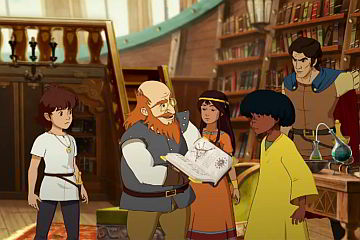 As Esteban and Tao are threatened by Pang Zi, a funny and fanciful character appears. With some multicolored flasks, he thwarts the pirate crew. They barely have time to bounce back that the Great Condor comes around, driven by Zia, with Mendoza, Sancho and Pedro on board. Mendoza jumps in and starts to fight Pang Zi, but he is soon overwhelmed by the number of enemies. He flees into the river. The Great Condor flies away with Esteban and the stranger hung on to his legs but they fall in the forest and eventually end up stuck in vines.
Mendoza joins them and they meet their new friend : Ambroise de Sarle, nicknamed Ambrosius, a French alchemist and traveler. He offers to bring them to his "home". On their way, the Great Condor flies over them. Because of Sancho's clumsiness, Zia has to crash-land in the rice paddy. She faints and Ambrosius - who also calls himself a doctor, geologist, astronomer, cartographer and philosopher - offers to examine her.
When they arrive to his "home", our heroes discover a fabulous flying nave, full of books, flasks and instruments. Ambrosius wakes Zia up and proceeds to ask more about the Great Condor, but Mendoza is suspicious. Tao then notices a curious book in the library : "The book of the 7 languages", written by his ancestors of Mu and which contains information about each of the seven cultures. Ambrosius explains that, as an alchemist, he has discovered an unknown and marvelous metal : orichalcum, which is similar to gold yet able to gather energy. He has been able to follow our friends thanks to his compass made of orichalcum, which is able to detect the condor, also made of orichalcum !
But their conversation is interrupted by the arrival of pirates.

Documentary: the rice terraces of Longji, near the mountains of Guilin.
Kokapetl's Scoop: the orichalcum, a legendary metal that philosophers like Plato tried to transmute.