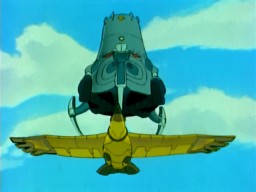 The appalling Olmec war machine flies over the base of Apuchi, while the Mayan fighters try to flee, in vain: caught by the moch of Olmecs, the Maya are instantly atomized by a powerful ray of heat. Esteban, followed by Tao and Mendoza, runs as fast as he can to the Grand Condor.
The son of the Sun has only one idea in mind: to free his friend Zia. The golden bird takes off despite the worries of Tao and Mendoza, who wonder how the Condor will resist such a powerful machine. An aerial duel is set up. Esteban utters a cry of despair when he sees Zia accompanied by kalmec and Menator. Moving away from the mountain following the wise advice of Mendoza, Esteban directs the Great Condor towards a huge lake with an island in its center. This geographical curiosity makes the sailor perplexed ... but the Olmec machine is again nearby. The machine is positioned above the Condor and tries to neutralize it with its powerful beam. Desperate, Esteban tries a bold maneuver: the boy decides to open the cockpit of the Great Condor above the Olmec machine and let himself fall bravely into the air, followed by Tao. For its part, Mendoza tries somehow to regain control of the Condor but can not avoid a free fall to the ground, under the victorious eyes of the Olmecs.
During this time, the two boys land on the roof of the aircraft and enter inside of the flying machine. They immediately look for the cockpit, where they think they will find Zia. Meanwhile, the Olmecs decide to land in order to seize the occupants of the Condor. Once outside, an Olmec patrol announces that the Grand Condor is empty, which annoys Kalmec who orders to burn the golden bird. With these words, Esteban and Tao appear. While Esteban struggles against several Olmecs, Tao awkwardly tries to take off the infernal machine. Furious, Menator orders Kalmec to rejoin the cockpit. Tao manages to put the Olmec commander out of harm's way and allows Esteban to go to the room where Zia is captive to Menator. The young Inca triggers the closing of the door, just in time for the two children to stay alone with the old king. Seeing that the war machine flies over the lake observed aboard the Condor, Esteban does not hesitate a second: he uses his dagger and manages, under the horrified eyes of Menator, to break the porthole. The children dive together in the lake while the Olmec soldiers manage to break the door of the room. Menator swears that he will catch them: the survival of his people depends on it. For his part, Esteban swims with Zia, inanimate, towards the mysterious island ...