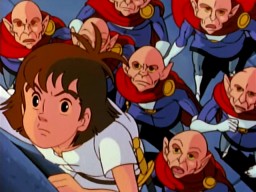 Our friends are captured without resistance by the Olmecs. Kalmec sends them back to the room where the children had taken refuge the day before when they lost consciousness and he informs Menator of their presence. The statue in the room opens and the great Olmec leader appears. He asks to brings "the mysterious object" and calls Myena; then a door opens and there appears a girl with a sad face, closed eyes, who brings the encyclopedia and the vase of Tao. Tao wants to recover his possessions but the old king ignores him and asks them what they know about the Cities of Gold, which astonishes our friends; why do the Olmecs, who have a great source of power, seek the Cities of Gold? Mendoza explains that they don't know much about it, which annoys Menator. The old man finally orders Kalmec to take charge of the prisoners, and to hand over the children to the nurses. Myena immediately disappears with the vase while Olmec reinforcements arrive to catch the children. They try in vain to resist and Esteban receives a violent shock which makes him lose consciousness.
Mendoza, Sancho and Pedro are taken as prisoners to the base's sewers, while the children are escorted to the operating room. Esteban is still unconscious, which worries Zia and Tao. Menator observes them and rejoices at the idea of ​​being able to seize their young cells in order to transplant them and thus rejuvenate Olmec old men. He orders Kalmec to hibernate them so that they won't run away. For their part, Mendoza and his two accomplices manage to keep company with their guard. To his surprise, Myena brings back his sword and explains to him that the children will be frozen and that it is necessary to help help quickly. Mendoza then understands that this is a Mayan girl kidnapped by the Olmecs.
Meanwhile, the preparation for cryogenization begins and Esteban has still not regained consciousness. The children are tied and, despite their resistance, a glass coffin suddenly covers them. Mendoza arrives easily at the crystal tower and Kokapetl helps him by setting off a false alarm. Mendoza quietly manages to close the safety valves, while disrupting the cristal. Esteban regains consciousness and Tao explains that they will be frozen alive. The children begin to shudder, but thanks to the disruption of the energy system, the process stops just in time. Mendoza then releases the children.
At the same time, the Olmecs are trying to réparer their system which allows children and Mendoza to flee, but are pursued. They luckily find a passage leading to the evacuation of wastewater where our four friends dive. Below, they find Myena, Sancho and Pedro. Myena returns the vase to Tao, which pleases the boy. All speedily follow the conduit that leads them out of the mountain. They are free, but for how long?