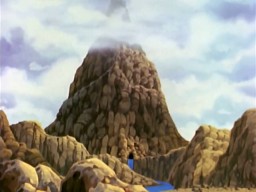 As they approache a strange mountain, Mendoza says it doesn't look like a shield and Esteban adds that no smoke escapes. However, radiation appears at the top and Tao's vase glows. When the radiation stops, the Tao vase does the same. Esteban proposes to go near the mountain to clear up these phenomena. They then enter a cave from which escapes a small river. When the level of the river rises suddenly, all take refuge in height and Tao discovers a staircase going up towards the interior of the mountain.
Beyond this passage, our friends find themselves facing a totally different world from what they knew until now: in the heart of the mountain rises a gigantic crystal . A handful of humanoids, bald and with pointed ears, are busy near the crystal manipulating curious commands. Suddenly the crystal lights up and Tao's vase responds to him again. The young boy assumes that this installation serves to produce a form of energy ...
Suddenly, one of the mysterious characters signals to his superior a malfunction due to an "intruder" object. The latter, named Kalmec, orders to search this object in the base. While Mendoza, Sancho and Pedro try to find a way out, the children arrive in a big room. Zia thinks of a temple. But when they are about to leave the room, a loud voice stops them and coldly welcomes them. The voice is the god of the Olmecs and their soul. It informs them that they are in the base of Apuchi, the only base of the Olmecs. Tao proposes to leave. But a dazzling light makes them lose consciousness.
When they wake up, they are all three lying and examined. An old Olmec appears and comes to Esteban. His name is Menator and he claims to be the leader of the Olmec people. Zia is frightened by what she believes to be corpses in glass coffins. Menator tells him that these bodies are simply asleep and that they will wake up thanks to the medicine he himself invented. Then he orders Commander Kalmec to watch carefully over the children. With these words, the old king disappears as quickly as he appeared ...
On their way to their apartments, Tao and Esteban wonder about what they heard from Menator: "cell transplantation", "regeneration" ... none of this speaks to them, not even to Tao. Suddenly appear Mendoza, Sancho and Pedro, who come to the rescue of the three children by disarming the Olmecs. All flee then by borrowing a new staircase. They reach the top of the mountain, but no path can get down. Here they are stuck. While Mendoza try to find a way thanks to the position of the Mayan ruins and the river, many strident howls are heard. But who are these Olmecs? What are they doing in this mysterious mountain? What do they hope with Esteban, Zia and Tao? And above all, would they have any relationship with the Cities of Gold? The screams are getting closer ...