Episode 25: The Lake of Gold 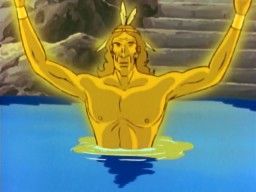 During their escape into the mountains of the Mayan country, Esteban, Zia and Tao discover an altitude lake into which a spring flows. All note that the lake shines mysteriously. In order to be sure, Esteban dives and shows his friends a strange golden sand. Suddenly, a loud voice is heard. A man reproaches them for having desecrated the sacred spring. In the early morning, the three children are locked in a cell when a villager secretly brings them food. She teaches them that following the profanation, a purifying feast is about to take place to appease the wrath of the Sun God. She also informs Zia that an Inca named Papa Camayo has been to their village in the past, what make the girl happy.
Short after, appears Kokapetl who keeps repeating the name of Mendoza. Tao then sends the parrot to seek help from the sailor. A little later, a priest-like man appears to the children and asks them to follow him. All go to the lake. Under the eyes of the children, the priest and the village chief then proceed to a strange ceremony. At the sound of the drums, the priest coats the body of the Mayan chief with golden sand identical to that found by Esteban the day before, at the bottom of the lake. Like a golden statue, the chief then enters the waters of the lake and invokes the Sun. The villagers exult and throw many precious jewels into the lake. This scene excites the greed of Marinche but also Mendoza, Sancho and Pedro, who watch the scene with a watchful eye. All are wondering about the way to recover the jewelry after the ceremony. Marinche proposes for her part to the Doctor to poison the water of the villagers ...
After the ceremony, the children are locked in the village temple. Zia understands with horror that they will be sacrificed the next day. All three then actively seek a way to escape this fatal destiny. For their part, Mendoza exposes to Sancho and Pedro how they will proceed to recover the treasure of the lake: the latter being retained by an artificial dyke, they just have to destroy the dike and to seize the jewels. When night falls, the three Spaniards execute their plan and get to work using makeshift tools. At dawn, Sancho sees Marinche coming to drop the poison jugs near the spring. Mendoza understands that they mustn't waste time. But in his eagerness, the sailor accidentally rolls a rock, which alerts Marinche. She alerts the villagers who come out of their homes. But it is too late and the surrounding mountains are already shaking. In a deafening crash, the dike gives way and a wall of water floods the village. The temple begins to collapse under the pressure of the water but the children manage to leave it thanks to a boat located on the altar. Kokapetl succeeds in stealing the manuscript from Marinche and hands it over to Tao. Although he helped the children escape, Mendoza's plan did not allow him to recover the coveted treasure. Indeed, the water of the lake took away the jewels ... but now together and in possession of the complete manuscript, the three sailors and the three children can continue their road towards the Cities of Gold ...