Episode 32: Attack of the Olmecs 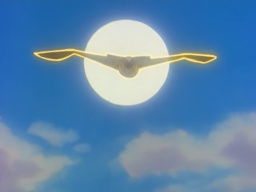 A column of fire moves in the night: an impressive number of Olmecs, directed by Kalmec and armed to the teeth, is about to annihilate the village of the New Sun. The children are en route to the place where they had to leave the Great Condor a few days ago. Suddenly, they are frightened by two silhouettes who pursue them, but they discover that it is only Commander Gomez and Captain Gaspard, disappeared in Inca country, near the High Peak. The children are nevertheless surprised and admit that they believed they were dead. Around a campfire, an astonishing discussion begins. The two Spaniards explain to the children to have deserted the army of Pizarro. Their only goal today is to find the Cities of Gold. While questioning the children on Mendoza, Zia lies and declares that he was killed by the Olmecs. Taking advantage of this lie, the children ask the two deserters to help them recover the Great Condor, in his honor. These accept.
In the village of New Sun, a barricade of wood is built to condemn the only access to the village. The attack begins, with a duel between the Olmec spears and the Mayan arrows. But the Olmecs are outnumbered and are already starting to climb the barricade. Meanwhile, as Marinche and the Doctor marvel at the Condor, strange lights appear in the jungle. The Olmecs are frightened by seeing a large luminous monster appear, crawling towards the pit. The children, at the origin of this curious "animal", descend to the Great Condor. While they are caught by the Olmecs, the beast explodes with the powder brought by the two Spaniards. Finally arrived at the bottom of the pit, children manage to get into the cockpit. Esteban implores the Sun and it finally rises. Thanks to his energy, he gives new life to the Condor rising in the air, under the amazed gaze of Marinche and the Doctor. The unfortunate Gaspard and Gomez, hanging on the outside of the cockpit, fall on the top of a tree, after an acrobatics of the Condor. The latter, finally released and with the children on board, flies straight to the village of Myena.
In the early morning, the situation is clearly at the disadvantage of the Mayans. The burning arrows of the Olmecs destroy the barricade and set fire to the houses of the villagers, under the proud gaze of Kalmec. The old village chief, judging the situation sufficiently critical, gets up and decides to go fight. A fight with the wrestling engages. Wynacocha is saved by the old leader who receives an Olmec arrow. With the energy of despair, the Mayan warriors look up to the sky and finally see the Great Condor. With agility, Esteban manages to scare the last Olmecs. The children then land in the village, where a sad news awaits them ...