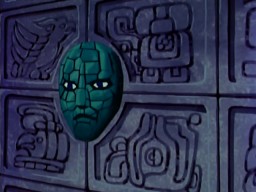 Disturbed by this event, Tao wonders about the ideograms observed the day before in the room of the jade mask. From what he had read in his encyclopedia, the key to the enigma should be precisely in the mysterious mask. On the initiative of Esteban, the three children decide to go back to the underground room and discover that the entrance has curiously reopened. According to Tao, the purpose of the jade mask was to judge and indicate the fate of people.
Upon closer examination, the boy manages to read inscriptions in his eyes. "Two horizontally, press the Serpent", then "One diagonally, press the Eagle". Zia understands that they must to press on the bas-reliefs around the mask. When Esteban and Tao press them, a new mechanism lights up the mask again. The blocks of stone are back in place and the ground opens. It reveals a very bright light and a new room, below the first one. Esteban leads Zia and Tao in his fall and all face a kind of sarcophagus. Despite the reluctance of Zia, Tao and Esteban decide to open it. Inside, they discover a fragment of manuscript, placed near a small stone statuette. Tao seizes the parchment and decides to go up to decipher the scriptures.
Outside, the three Spaniards were captured. When the children try to flee, they discover the responsible ones: a Spanish armed with a whip, Fernando Laguerra nicknamed "The Doctor" and a troubling Mayan woman named Marinche. She immediately notices Tao's manuscript and orders an imposing warrior, Teteola, to hand it over to her. Marinche is in possession of the other half of the manuscript and, finding that the two fragments correspond, take them with the vase of Tao. The children are imprisoned in a ruin with the three Spaniards, under the supervision of a guard. There, Mendoza exposes to the children what he knows about these characters: the Doctor would have been in the army of Cortez. As for Marinche, she would be a treacherous Maya woman, a traitor of her people. Thanks to a diversion of Sancho and Pedro (but also Kokapetl!), Esteban and his friends escape the guard. In the rush, the children seperrate from Mendoza in order to recover the vase of Tao and the complete manuscript. For their part, Marinche and the Doctor still can't decipher it. Taking advantage of their inattention, the children seize of the vase of Tao but alert their abductors. Thanks to the unexpected help of Mendoza, Esteban, Zia and Tao escape from the the Doctor, who threatened them with his whip. Separated in panic, our friends finally sow their pursuers ...