Episode 28: The Forest of Statues 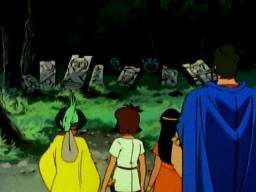 As they take the road to the north, towards the forest of statues indicated by the second manuscript, our friends realize that Marinche and the Doctor were saved by Teteola. In spite of that, Mendoza decides to arrive discreetly before them to the third city. Suddenly Pichu signals the presence of a river. Mendoza notices that it flows northward. He has the idea to build a raft that will lead them to the forest of statues. All set to work and the raft sailed quickly to the rhythm of the river.
After having passed a series of rapids, Kokappetl alerts them: he heard a waterfall. Mendoza decides to row as best he can to the nearest shore. However, weakened by the rapids, the raft dismantles and its occupants are overthrown in the river. If Sancho and Pedro manage to swim to the shore, this is not the case for children or Mendoza who are forced to face the fall. Fifty meters down, only Zia remains inanimate. All are relieved when the girl regains consciousness. Tao observes some statues on the edge of the wood, which confirms their path.
For their part, Sancho and Pedro try to join the troupe along a path along the waterfall. But Pedro seems to have made a big discovery and says he found "gold". The others join them and find that it is only a golden sand escaping from a stream, behind the fall. Going up the cave, our friends reach the entrance to an underground city. On the ground lies the statue of the Plumed Serpent, confirming that it is indeed the third city. But where is the manuscript? Esteban notices large stone doors at the back of the huge hall. After careful consideration, Tao thinks that the sun must fall on these doors to open, as for the door of the night. Esteban proceeds in the same way, using his medallion. The stone gates open and collapse in a loud roar. A manuscript then appears in the hands of a gold statuette. Kokappetl brings back the document and Tao can proceed to its translation: "the sky began to boil that day, the dust fell on the Earth and huge clouds piled up on the sea". All are surprised by this announced apocalypse, which apparently has no connection with previous messages. Frustrated, Tao throws the three manuscripts on the ground. Esteban notes that some ideograms stand out more than others. Tao replied that with the humidity of the river, characters had to be erased. But the young descendant of Mu refuses to believe at random. Reading only the visible characters, he finally deciphers a new message: "in the west of the Mayan country, look for the mountain of the Burning Shield ...".