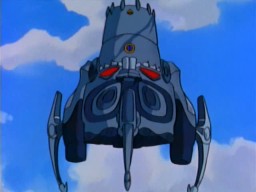 Wynacocha, victorious, announces to Mendoza that the Mayan soldiers have defeated most of the Olmecs and that they just have to seize their king. The sailor is then alerted by a Maya soldier, who saw the children entering the base with two Spaniards. Without losing a second, Mendoza, Sancho and Pedro rush into the base, chasing them.
Led secretly by Gaspard and Gomez, the three children are thus forced against their will to enter into the Burning Shield. Suddenly, a silhouette appears. It is a hologram of Menator who invites them to follow him to the Cities of Gold. Esteban and his friends are not fooled, unlike the two greedy Spaniards who fall into the trap set by the old king. The long corridor ends with a staircase, which all descend. However, it remains to the Olmecs to know the precise location of the Cities of Gold to seize the Great Legacy, which will allow them to accomplish their purposes. Down the dark stairs, Tao simulates a fall, and thanks to a moment of inattention of the two Spaniards, manages to escape with Esteban and Zia.
At the bottom of the stairs, they find refuge in the room where lies the sleeping Olmecs. Gaspard and Gomez join them but are immediately frightened when they see the frozen bodies. Menator appears again and explains to them that long ago, the Olmecs lived on the surface of the Earth. A terrible war broke out and most of the population perished. The air became contaminated and unbreathable, they had to take refuge underground. However, the Olmec survivors suffered strange mutations that made them, among other things, completely sterile. That's why they absolutely need to get young cells. But Esteban is suspicious: he knows that the Great Legacy in the City of Gold must never fall into the hands of the Olmec people.
The children, accompanied by Menator and the two Spaniards, are taken to the hall of the great statue, where they first heard the voice of the "god of the Olmecs". The monumental statue opens and Menator announces that the Cities of Gold are just behind. He asks them to follow him. Taking advantage of a moment of inattention, the children flee, but Kalmec arrives. He grabbed Zia under the desperate gaze of Esteban, while Menator ordered Gaspard and Gomez to be killed. They owe their survival only to the surprise arrival of Mendoza.
However, Menator, Kalmec and Zia manage to disappear. Liberated, Esteban and Tao want to follow Zia, but are stopped by a blinding light emanating from the statue, which closes immediately. Menator proposes to release Zia if Esteban reveals to him the exact location of the Cities of Gold. The boy, hearing the cries of his friend, gives in and reveals the position. But Menator does not keep his word and keeps the young Inca captive.
Suddenly, a deafening noise is heard. Mendoza orders the children to leave the Olmec base which begins to tremble. A gigantic machine then emerges from the depths of the base and digs a way out. The four Spaniards, accompanied by Esteban and Tao, escaped unscathed, unlike Marinche, Tetiola and the Doctor. The Olmec war machine finally leaves the mountain and takes flight, under the horrified eyes of the Mayan warriors ...