Episode 27: The Doors of Night 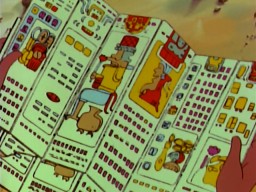 Esteban and his friends continue their route to the east, following the indications provided by the manuscript. While they hear screams in the jungle, they suddenly face a high cliff cut in two by a fault. The screams are caused by the wind, blowing violently between the rock walls. Mendoza decides to take the path of the wind, but Sancho and Pedro trigger an avalanche of rocks and huge blocks hurtling down the high cliffs. Miraculously, all come out unscathed.
Zia discovers the entrance of a cave leading to a beautiful Mayan city in ruins. According to Tao, this is necessarily the second city evoked by the manuscript. The appearance of a statue representing the Feathered Serpent confirms these assumptions.
Suddenly, a huge block of stone fails to crush Mendoza. While they believe to sue the author of the attack, Zia is captured and calls Esteban for help: Marinche, Teteola and the Doctor are on the spot! The latter orders Mendoza to return his gun in exchange for the young Inca. Esteban executes the order. Then the Doctor and Marinche take the three children to a temple, inside which there is a statue of a jaguar. Under the statue are engraved Mayan ideograms. Tao deciphers them under duress: "When he cries in front of the Sun, the Door of Night opens." Esteban and Zia understand that they have to reflect the light of the Sun on the statue what Esteban does thanks to his medallion. The eyes of the jaguar illuminate and the imposing statue moves, revealing a staircase.
Outside, Mendoza, Sancho and Pedro are still the prisoners of Teteola. The swift Mendoza takes advantage of a moment of inattention of the Maya colossus to recover his spear and disarm him. Teteola then tells the sailor where the children were headed while Sancho and Pedro tie him "securely" ...
In the temple, Marinche, the Doctor and the children enter a room at the end of which is a new manuscript. While wanting to seize it, the Doctor triggers a system of counterweight and the floor of the room sinks. Tao violently pushes Marinche who joins his acolyte a few meters below. Kokapetl then takes the opportunity to bring the manuscript to Tao and the children leave the temple, without any qualms this time. The setting sun ignites the Mayan country while the three sailors join the three children at the top of the pyramid.
Tao understands with the help of the new manuscript that they will discover the location of the Cities of Gold only by finding a third and ultimate parchment, in the heart of a forest of statues ...