Episode 22: The Mirror of the Moon 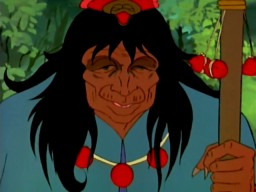 Now guests of the Queen of the Amazons, Esteban and his friends discover the luxurious room where they will live in the City. However, Paola tells them they can not leave alone. Mendoza can't accept this situation and wants to escape their surveillance, by any means.
Meanwhile, the three children meet Morka, a young servant and the favorite of the Queen. This one comes to offer them to drink, but all note the anxiety of the girl who clumsily drops the glasses to finally burst into tears. She begs Esteban to help her: indeed, the perfidious Omoro wishes to offer her as a sacrifice, instead of the three children. However Morka is not fooled and knows that Omoro is deeply jealous of the power of the Queen. She also knows the power of the priestess, who has the power to predict rain falls and to communicate with the gods. Affected by this revelation, Tao wants to go to the temple of the god of the rain to clarify the words of Morka. There, all discover the totem of the god. But the scientific eye of Tao also locates a hydrometer, a curious meteorological tool to measure the atmospheric pressure.
Mendoza warns Esteban that he has found a way to escape. Reluctantly, the children follow him and manage to get out of the wall of the City. Armed with an ax, our friends join the river, build a makeshift raft and try to reach the Great Condor. But despite their efforts, a giant snake manages to destroy the raft. Suddenly a spear reaches the snake in the head and kills him, as he prepares to attack Esteban and Zia. All discover that from the shore, Paola has saved the lives of the two children. But Omoro sneakily watched the scene and accused Paola of endangering the entire tribe. Indeed, this sacred anaconda was protecting the Amazons from the Seibans, their enemy tribe. in the presence of the Queen, Paola defends herself and claims that she has simply protected the life of the Son of the Sun.
A little later, Omoro launches dire predictions: the storm is about to fall on the city. However, things go wrong for her. Indeed, the mechanism allowing her to predict the rain falls changes abruptly. Victim of the opportunism of Mendoza, who had negotiated her exile if the storm did not strike, the priestess chose to flee loosely the city and to side with the Seibans.
The next day, having noticed the departure of Omoro, the Queen thanks the children and learns, thanks to Tao, how this one proceeded to predict the rain fall. Suddenly Paola alerts the whole tribe: the Seibans, accompanied by Omoro, are about to attack the City. Esteban remarks that the Great Condor could help them repel them. But how to take it off? Tao suggests borrowing the mirror from the Queen and using it to reflect the light of the sun on the golden bird. The Queen accepts and all take the road of the river, with the Mirror of the Moon. Paola skillfully manages to provide the Great Condor with the required solar energy, and the bird immediately takes off. Launched at full speed, Esteban manages to capsize all the boats of the Seibans and thus gives the victory to the Amazons. From the sky, all say goodbye warmly.
Esteban and his friends take the road to the north, to new adventures ...