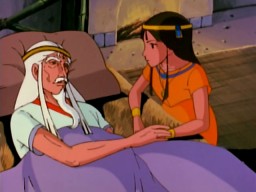 In the village of New Sun, children are surprised to see all the villagers sad and disappointed. Mendoza then tells them the news: the old chief is seriously wounded. Zia approaches and immediately recognizes her father, Papa Camayo from Puna. The father and daughter hugh each other and both can not hold back their tears.
At night, everyone is gathered in the house, around the dying chief of the village. The latter declares that his destiny is to reveal a heavy secret that he has kept throughout his life. Papa Camayo tells how, five years ago, the Spaniards ransacked his village, Puna, how they began to plunder the Inca riches, and especially how they took without mercy his only child, Zia. He also explains that, during his journey beyond the mountains, he himself discovered a City of Gold. He agrees to reveal its location, even in the presence of Mendoza: it would be at the intersection of the diagonals of a square, formed by the Burning Shield and the three Mayan cities in ruins. The old man describes its beauty but also warns that a great danger threatens it: the Olmecs mustn't in any case seize the great treasure it contains ... on these last words, Papa Camayo grows his last sigh. Myeena and Zia burst into tears. Their reunion was so short!
Outside, Mendoza immediately begins to calculate the location given by Papa Camayo, which outrages Esteban, who thinks of the sadness of Zia.
For their part, the Olmecs have other concerns. They still do not understand how such a big golden bird could fly. They reject the fault of their failure on Marinche and the Doctor, who are thrown into prison. But a very different problem worries Menator: the energy produced by the large crystal decreases, which jeopardizes the freezing of olmecs.
The next day, near the village of New Sun, the villagers gather in front of the tomb of Papa Camayo. Wynacocha, who refuses to admit defeat, proposes to visit the other Maya chiefs of the region to wage war against the Olmecs. However, despite the courage of the young warrior, the leaders of the surrounding villages refuse to help, being afraid of Olmec's superiority. Back in the village, Wynacocha does not give up and offers to fight without outside help. The children agree to help them with the Great Condor, in memory of Papa Camayo. At the end of the day, the Mayan leaders change their minds and all agree to wage a final battle against Olmec oppression. It's time for the last Mayan revolt ...